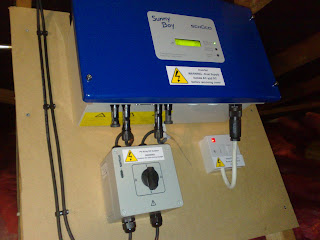 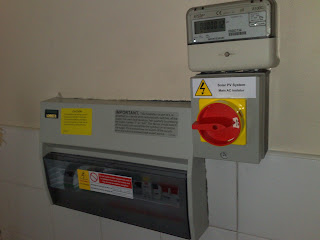 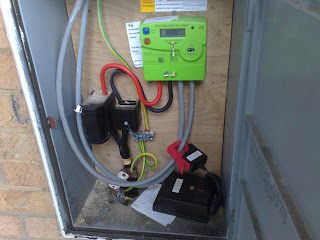 The electricity meter has been switched to an import / export meter. The meter gives the amount exported to the National Grid (ie total produced by the solar panel minus total consumed at the time in the house), and also the amount imported from the Grid. You can see the current cost clamp in the picture. This is interesting, because the current cost meter measures the flow of electricity regardless of which way it flows... so it reads 100W when the house consumes 100W, and it reads 100W when the house exports 100W. It was highly confusing turning on a light to see the amount on the meter decrease! So one of my Christmas projects is to connect another meter to the solar panel cable, and add the two readings together in order to get a sensible output... more on that later.
Posted by Kevin X Brown at 3:24 PM 3 comments: 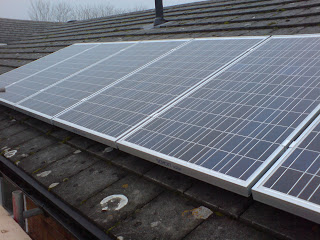 Here's a photo of the solar panels which were fitted to our roof today by Rayotec. They should provide us with 1kW electricity per hour in peak sunshine, but just around 100W per hour in horrible foggy weather like today. Tomorrow morning they will be grid connected, so any extra electricity we don't use will go back into the grid. With Southern Electricity giving us slightly more per unit than we pay for our electricity, there's still an incentive to use as little as we can. We expect the unit to just about cover our usage, over a yearly period. It cost around the same as having all our doors and windows replaced a few years ago and we're promised a similar length of service. So, we're just looking forward to the grand switching-on ceremony tomorrow morning!
Posted by Kevin X Brown at 5:23 AM 3 comments: